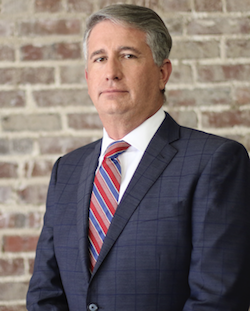 For 27 years, Brandon has devoted his practice to helping people. His practice's fundamental philosophy is to treat each client the exact way that he would want to be treated if he were in that person’s situation. Over the past 27 years, Brandon has represented over 13,000 people and has made it a priority to be personally involved in each and every case that his office handles. He is conscientious and cares deeply for his clients, treating then as if they were his own family. He is client focused, sympathetic, and he values communication. However, at the same time, he is determined to be am aggressive, savvy and driven attorney who protects his client's interest in any situation. His main focus at The Sellers Law Firm is Bankruptcy, Personal Injury, Worker’s Compensation, and Social Security law.

Brandon was born in Houston, Texas, and moved to Greenville, Alabama at the age of six. He attended Butler County public schools and graduated from Greenville High School in 1986. After graduation, he attended Troy State University and graduated in 1989 with a B.S. in History and Math. While at Troy, Brandon was president of College Young Democrats and a Member of Delta Chi fraternity. Thereafter, he attended the University Of Alabama School Of Law and received his Juris Doctorate degree in 1993.

In 1993, he began working as an attorney for Allenstein & Associates in Gadsden, Alabama, and considers working for Myron Allenstein as one of his greatest learning experiences. In 1995, Brandon returned to Greenville to start his own practice. He quickly learned that starting his own practice would be one of the greatest professional challenges of his life.

Since 1993, Brandon has successfully represented people in many areas of law and has obtained millions of dollars for plaintiffs in personal injury actions. He has also represented hundreds of defendants in criminal cases and obtained many not guilty verdicts in high profile cases that involved rape, robbery, and murder. Perhaps the greatest success in the area of criminal law has come while representing defendants in capital murder cases.

As his practice has evolved, he now devotes the majority of his practice to Bankruptcy, Personal Injury, Worker’s Compensation, and Social Security Disability/ SSI law. Brandon was an Alabama Education Association network attorney and represented teachers and school employees. He now is an elected member of the Butler County School Board. Brandon takes a personal hand in being involved and being knowledgeable of each case that his office handles. Brandon has had the privilege of practicing law with his sister, Julie Sellers-Swann. Working with family has been very rewarding. When Brandon says that The Sellers Law Firm is truly family oriented, he means it. Each and every attorney and member of the staff is like family. Everyone celebrates together, and cries together. By being such a close-knit office, The Sellers Law Firm is able to provide the same care for clients that they have for each other.

Brandon is the very proud father of three wonderful children, Mallory, Grace, and Carlin. Brandon is also the proud grandfather of Jack and Daniel. He and his family are members of First Baptist Church in Greenville. He is an avid motorcycle rider, classic car collector, and scuba diver. More than anything, Brandon’s greatest joy are his children and grandchildren.

Brandon is a member of the National Association of Consumer Bankruptcy Attorneys, the Alabama State Bar Association, and the Alabama Criminal Defense Lawyers Association. Brandon is admitted to practice before all Alabama State Courts, the Southern, Middle, and Northern Federal District Courts, and the Eleventh Circuit Court of Appeals. The Sellers Law Firm is also actively involved in the Alabama State Bar Volunteer Lawyers Program where they perform free legal work throughout the community. The Sellers Law Firm believes that people of Central Alabama have been very supportive of this firm, and Brandon and his team owe it to the community to help support activities and charities throughout the area.

The Sellers Law Firm is designated a debt relief agency by an Act of Congress and the President of the United States. We have proudly assisted people seeking relief under the U.S. Bankruptcy Code for four decades.

Contact Us Now
Practice Areas
Client Reviews
★★★★★
Brandon was my first choice for an attorney because he is part of the community and you see him at the local store or PTA meetings and he always has time for you and answer your concerns. Ronica Phifer
★★★★★
The Sellers Law Firm represented me in my social security case, and later in my Chapter 7 bankruptcy. I have been very happy with all that you have done for me, and I refer people to you all the time. Thanks for all that you have done for me and my family. Angie Langford
★★★★★
I would like to start out by saying Brandon sellers is more than a lawyer that has helped my family out in numerous occasions but he's also a great friend to our family. Whenever he can't find a resolution for the problem he always recommends somebody that can. I've known him for years grew up together always been really good friends. I like to say in closing I'm really glad I know him I'm glad he's been able to help us when we've needed him. Thanks for everything you've done. Timothy Palmer
★★★★★
The sellers law firm is the best in Alabama they are friendly and very professional from the attorneys to the people in the office. They where very helpful throughout the whole process and even after it was over. So if you are in need for a bankruptcy firm give Brandon sellers a call you won't be disappointed Thank you Again Brian Floyd
★★★★★
I highly recommend Sellers Law Firm, they are fantastic and care about their clients. They walk you through step by step and advise you of your options. Sheila Wright
View More
Submit a Law Firm Client Review