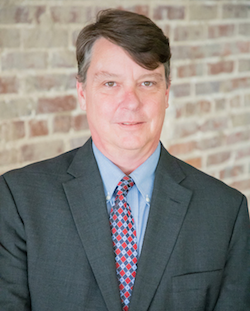 Chris was born in Auburn, Alabama and lived in Tuscaloosa, Atlanta, North Augusta, and Charleston before his family settled down in Prattville, Alabama. He is a 1987 graduate of Prattville High School and earned his Bachelors of Arts in Political Science from Auburn University in 1992. Among the jobs Chris had as he worked his way through Auburn was with the University Theatre Department building sets, welding, managing the box office and working in public relations. He also raced sailboats as a member of the Auburn University sailing team and helped organized and participated on Auburn University’s Model United Nations. After undergraduate school and before attending law school Chris lived and worked in Denver, Colorado. In Colorado he worked for May Company as a manager at Lord & Taylor. He also raced sailboats in the summer and snow skied and boarded in the winter. Chris received training and participated as a volunteer ski patrol member at Winter Park Ski Resort.

Chris returned to Alabama where he attended Auburn University Montgomery in their Masters of Public Administration program. While in the MPA program Chris returned to working with his father in his private practice firm that represented clients in family law, wills and estates, bankruptcy, and real estate matters. In his last year at AUM, Chris decided to also attend the Thomas Goode Jones School of Law at Faulkner. He received his Juris Doctorate from Jones in December of 2000. While in law school Chris continued to work with his father and in his third year of law school Chris obtained his Alabama Legal Internship which allowed him to actively represent clients and practice as an attorney under the supervision of a licensed attorney. He was admitted to practice law in all Alabama state courts and the United States District Court for the Middle District of Alabama. His practice at that time primarily consisted of bankruptcy and real estate.

Chris was admitted to practice as an Alabama attorney in April of 2001. Realizing he wanted trial experience he joined the District Attorney’s office for the 19th Circuit which prosecutes criminal cases in Autauga, Elmore & Chilton Counties. At the District Attorney’s office Chris handled traffic, misdemeanor, felony and juvenile cases. As an assistant district attorney, he tried hundreds of cases from juvenile delinquency to murder. From the District Attorney’s office Chris moved to Alabama’s Sentencing Commission where he traveled around the state and developed community corrections programs assisted in developing, implementing and training on Alabama’s criminal sentencing standards. The Alabama Real Estate Commission hired Chris in 2005 to serve as their assistant attorney general. With the Real Estate Commission Chris licensed and regulated real estate agents as well as registering and regulating timeshare developments that were being marketed to Alabama consumers. He also prepared and presented Alabama Real Estate License Law courses around the state and participated in the international Association of Real Estate License Law Organization’s (ARELLO) meetings as a member and presenter on real estate license law.

Chris brings his skills in extensive research, attention to detail and litigation in his representation of The Sellers Law Firm’s clients. He strongly believes that adequately handling matters in the justice system requires active understanding by a client as to the ability and limits of the law. Chris realizes that he is best able to represent clients by explaining legal issues in a case and then drawing out necessary information from a client. This partnership between attorney and client allows the best results possible to be achieved in managing any legal matter. Chris brings his years of experience to representing people with social security disability cases, Chapter 13 bankruptcy cases, and Chapter 7 bankruptcy cases.

Chris is married to Joy Booth, née Pace. They have three children Bowie, Callie and Caroline. Joy and Chris run their own ad hoc animal rescue where they pick up stray dogs, cats and even a domestic rabbit that has been abandoned. They see that the animals are returned to good health and neutered, and then work to find them loving homes. The Booth family attends Westside Baptist Church in Prattville. Chris’ hobbies include hobby farming, where he raises chickens for eggs and various fruit trees and bushes. He also enjoys just about any outdoor activity and playing with his children.

Please contact Chris at The Sellers Law Firm by calling 334-LAWYERS (529-9377). You may also reach him by email at cbooth@sellerslawfirm.com.

The Sellers Law Firm is designated a debt relief agency by an Act of Congress and the President of the United States. We have proudly assisted people seeking relief under the U.S. Bankruptcy Code for four decades.

Contact Us Now
Practice Areas
Client Reviews
★★★★★
Brandon was my first choice for an attorney because he is part of the community and you see him at the local store or PTA meetings and he always has time for you and answer your concerns. Ronica Phifer
★★★★★
The Sellers Law Firm represented me in my social security case, and later in my Chapter 7 bankruptcy. I have been very happy with all that you have done for me, and I refer people to you all the time. Thanks for all that you have done for me and my family. Angie Langford
★★★★★
I would like to start out by saying Brandon sellers is more than a lawyer that has helped my family out in numerous occasions but he's also a great friend to our family. Whenever he can't find a resolution for the problem he always recommends somebody that can. I've known him for years grew up together always been really good friends. I like to say in closing I'm really glad I know him I'm glad he's been able to help us when we've needed him. Thanks for everything you've done. Timothy Palmer
★★★★★
The sellers law firm is the best in Alabama they are friendly and very professional from the attorneys to the people in the office. They where very helpful throughout the whole process and even after it was over. So if you are in need for a bankruptcy firm give Brandon sellers a call you won't be disappointed Thank you Again Brian Floyd
★★★★★
I highly recommend Sellers Law Firm, they are fantastic and care about their clients. They walk you through step by step and advise you of your options. Sheila Wright
View More
Submit a Law Firm Client Review